Today I went to Andorra, the tiny country nestled in the Pyrenees directly between France and Spain. I had, really, one main goal in visiting Andorra: get a passport stamp. My roommate had read online that the stamp is Andorra's Coat of Arms (neat!) and I wanted one. Since I started with this anecdote, you're probably assuming that I didn't get a stamp. If so, you're correct. Did you know that when you're traveling within EU countries you don't get you passport stamped! But worse, the office in Andorra that gives stamps and all of the post offices were closed because it was Sunday. I know, our planning wasn't very well though out.

However, there were two things that made up for my lack of a passport stamp: 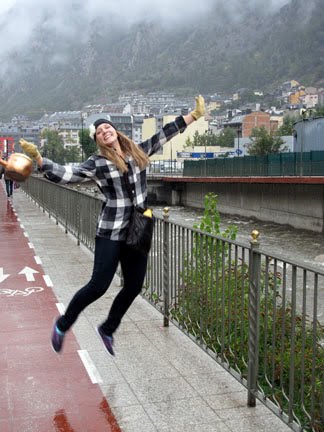 Yes, that is a copper teapot in my hand. I bought that amazing, antique copper teapot at the same store that was selling this shirt: 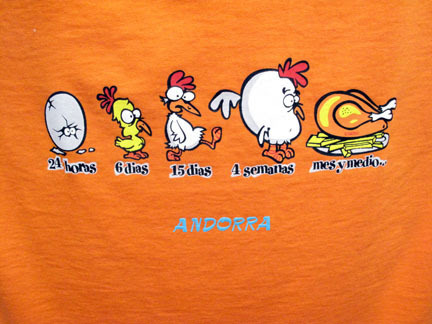 There was pretty much nothing else to do in the quirky country of Andorra, so we ate a nice lunch and headed back on a bus to Barcelona about 4 hours after arriving.
2 comments

This week I was able to take a cooking class through my Food and Culture class. I was excited all week because, number one, I love cooking, and, number two, my teacher told us that we would be cooking something exotic. I was picturing fruit combinations with unheard of spices. Little did I know, that exotic meant sardines.

Come to find out, not all sardines are pickled in salt and oil. They were actually just small fish.

The cooking instructor eased us in to the idea of cooking sardines with a wonderfully tasty Romesco sauce, made from peppers, tomatoes, garlic, olive oil, hazelnuts and almonds. Just when the room was filled with the wonderful Romesco smells, the teacher pulled out the slimy little full, eyes-in, scales-on fish.

It doesn't bother me to look at these gross little fish, but soon to find out, we would be doing a lot more than looking at them.

The teacher first showed us how to push our fingers backwards under the fish's scales to remove each and every fingernail-like, metallic scale. By this time I was starting to freak...I don't even touch the fish to give them to the dolphins at Sea World, much less descale a fish with my own hands.

But then came the kicker, the teacher nonchalantly explained how to push your fingers right in to the little fish's gills and squeeze until it's tiny head just pops off and its innards pour out. I was starting to sweat just watching her pinch of the fish head, but it wasn't over. You had to slide your finger in to the headless fish cavity and raise your hand up, splitting the fish down the center. Once it's open, you not only have to finish cleaning out the intestines, but you also have to break the large bones and remove them piece by piece.

My knees were tingling as I looked at the vegetarian in my class, he returned my horrified look of panic.

Once the instructor had finished cleaning her fish, she immediately had us form a line to receive our 2-3 sardines. I hung back and was happily last in line, hoping that they would run out of fish, but, of course, they didn't.

When I was handed my fish to descale, I almost couldn't touch it. But I knew I couldn't be the only one in my class who didn't clean a fish, so reluctantly I began peeling off layers of slimy scales. I was doing okay, until I hit a snag and one of the fish's fins popped out in to swimming position. I almost lost it. I'm terrified of fish in the lake, I don't even want them near me, much less to pull out a fish's fin. Once I had finished descaling the slippery little sucker, it was time for the debauchery.

I carried my fish to the table, which was now covered in fish blood, innards and some sort of brown gunk (I'm assuming fish poop). Not only was I disgusted by the task at hand, but I felt like I was covered from head to toe in fish scales, I had scrubbed my hands many times, but they're sticky and clear. I stood, trying to muster enough courage to physically rip a creatures head off, but each time I looked down at the little guy all I could see was his half-winking eye, asking me to please leave his head and his body together. I couldn't do it. 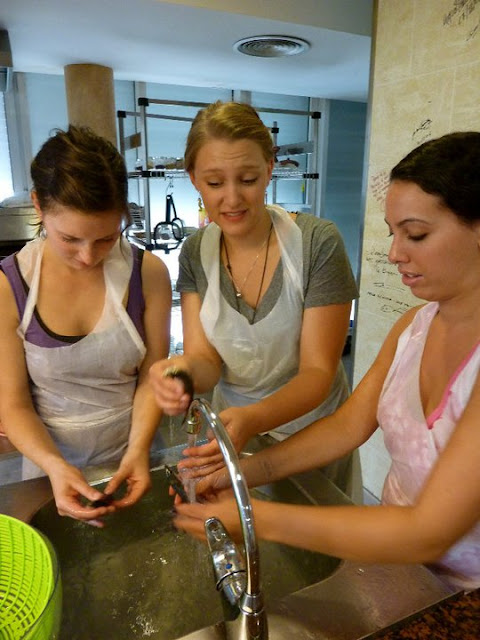 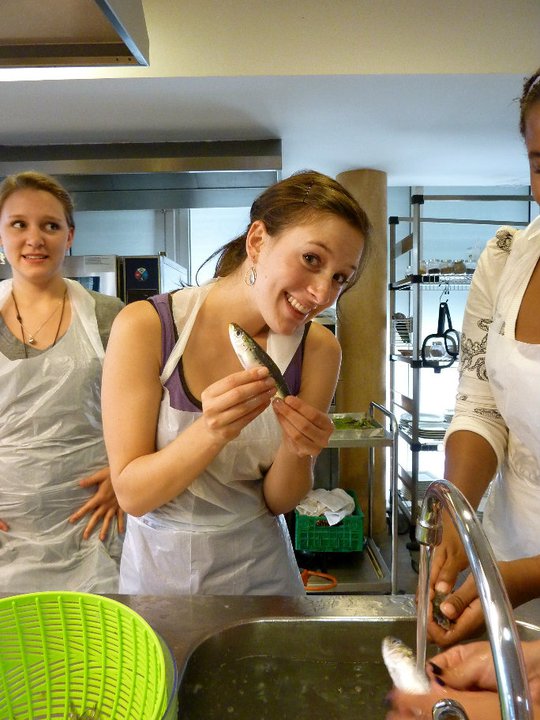 I don't know what gave it away, but the instructor sensed my overwhelming repulsion to the idea of dismembering a fish, walked over to me, grabbed the fish and within a second, my fish was headless.

She made me (quite literally moved my hands) open up the body cavity, pull out the organs and break the large bones out of the fish, a job that was only slightly less miserable than actually beheading the fish.

We fried the fish, and honestly they tasted decent. But, I will never again butcher or clean my own meat. I understand there is a certain pride in cleaning your own meat, but for me, I am going to leave it to the professionals.

This simply reaffirmed my want to have meat so well butchered and cleaned by the time I see it that it is unidentifiable as an animal.

I guess I'm glad that I got to doing something a little "exotic," but I can say confidently that I would never repeat this class.
0 comments

The Men of Valencia

I took a short (less than 24 hours in the city) trip to Valencia this weekend and one thing stood out more than all others about Valencia, the men.

Everyone that we encountered was overly nice, talkative and friendly, even if it was sometimes creepy. This "friendliness" of sorts, was severely exaggerated when it came to the men of Valencia.

Firstly, there was an old man who came up to my roommate and I and talked to us in Spanish about how pretty we were and how we should forget about our boyfriends while in Valencia for a good 5 minutes. During the 5 minutes, an American family came up to us to ask for directions, we told them we were just visiting too and they left. On reevaluation of the situation, we think they might have been attempting to save us from the awkward situation, we were too naive.

Our second encounter was with a man in a jewelry and craft store. He insisted on fastening my bracelet and also fitting me with a scarf (although he was a creepy salesman, I mostly enjoyed the small talk).

A third man came up to my roommate and I, kissed our hands and tried to talk us in to coming to the beach...that was a definite "no." This encounter I enjoyed the least, actually I can say, I didn't enjoy this at all, I'm not really okay with anyone laying a dirty teeth kiss on my hand, much less a stranger in the street in Valencia.

Finally, the best, was our waiter at the restaurant we chose for dinner. We had picked this restaurant because they offered paella, an appetizer, dessert and sangria all for 11 euros, a pretty good deal. We sat down and the first thing the waiter did was take our drink order, my roommate ordered a glass of wine and the waiter replied "sure." She took this to mean "are you sure," and got almost a little sassy with the confused waiter until I explained that he was just affirming that she had ordered wine. Next, he brought us an extra basket of bread (which we were a little nervous he would charge us for, but we couldn't resist). Our three appetizers came out one by one, salad, patatas bravas, and calamari. When our waiter realized that we didn't eat the calamari, he brought us an extra plate of patatas bravas.

I realize you might be thinking this is normal service, but in Barcelona, the service is pretty much non-existent, we would never be offered a substitute appetizer or extra bread.

Finally, we received our paella, and dessert and ate them both happily. After we had finished all of this food, we began to notice that all of the tables around us had been cleared and new people were being seated, but we still hadn't received our check. We started to try to make eye contact with our waiter, but he was very clearly ignoring us. After multiple tries and about 30 minutes, we decided that we would start to stand up and wave so that he would know we were finished. Maybe he had simply forgot our check. When we did this, he just waved back, so my roommate, annoyed by the uncertainty, said "our check." Our waiter continued to smile and wave while shaking his head no and motioning for us to leave.

That's right, we received a meal for FREE! We were astonished because we hadn't even been overly nice, talkative, or honestly even that clean (we had taken a 5 hour train earlier that day).

It was a wonderful day full of attention (whether wanted or unwanted). Valencia, I'll be back!
1 comments